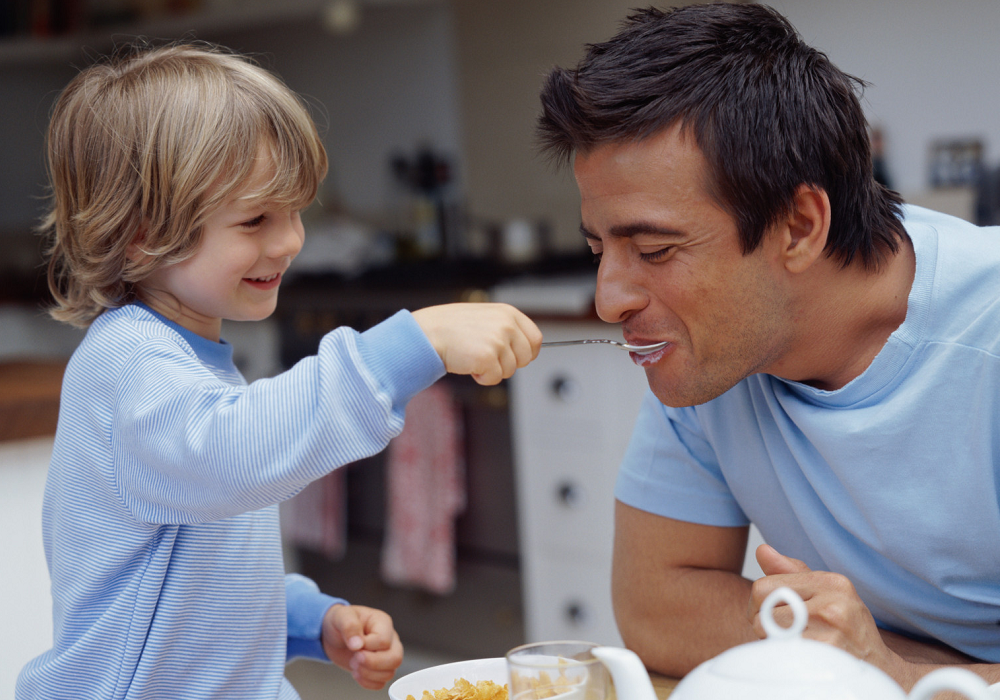 The days are past when experts advised divorced dads to make a clean break from the family and remain, at best, visitors in their children’s lives. Growing awareness that children do best with two parents, whether parents are living together or separated, has led to a trend toward shared parenting. Yet some holdouts believe that shared parenting, appropriate for older children, is ill- suited to meet the needs of young children.

Our society maintains a curious double standard when it comes to encouraging hands-on shared parenting. For instance, we want dads involved with their infants and toddlers—diapering, feeding, bathing, putting to bed, soothing in the middle of the night, cuddling in the morning. But when parents separate, some people mistakenly think that it is best for young children to spend every night in one home, usually with mom, even when this means losing the care their father has been giving them.

Despite all strides in cracking gender barriers, many of us still think that it is mom’s exclusive role to care for infants and toddlers, and that we jeopardize young children’s wellbeing if we trust fathers to do the job.

The result is the common custody plan where infants and toddlers whose parents separate only get to see their dads two hours at a time, two days a week. Hurriedly loading and unloading the child in the car and driving to and from dad’s home at the end of a work day hardly lays a good foundation for a comforting and secure relationship with dad.

Fortunately, science offers clear guidance on these issues. I spent two years reviewing the relevant scientific literature and vetting my analyses with an international group of experts in the fields of early child development and divorce. The results appear in Social Science and Parenting Plans for Young Children: A Consensus Report, recently published in the American Psychological Association’s prestigious journal Psychology, Public Policy, and Law.

The report is endorsed by 110 of the world’s leading researchers and practitioners. The endorsement by these scholars reflects a groundswell of concern among experts that misinformation about research evidence is impoverishing custody decisions and public policy.

Our first goal was to provide a balanced and accurate overview of settled, accepted research of the past 45 years relevant to parenting plans for children under the age of four whose parents have separated. Our second goal was to provide empirically supported guidelines for policy makers and for people who make custody decisions.

We found no support for the idea that children under four (some say under six) need to spend nearly all their time living with only one parent, when their other parent is also loving and attentive. Warnings against infants and toddlers spending overnight time with each parent are inconsistent with what we know about the development of strong positive parent-child relationships. Babies and toddlers need parents who respond consistently, affectionately, and sensitively to their needs. They do not need, and most do not have, one parent’s full-time, round-the-clock presence.

Many married mothers work night shifts that keep them away from their infants and toddlers at night. Like these married mothers, most single mothers do not need to worry about leaving their children in the care of their fathers. To maximize infants’ chances of having a secure lifelong bond with both parents, public policy should encourage both parents to actively participate in daytime and overnight care of their young children.

At psychologytoday.com they point out that scholars who study the benefits of children’s relationships with both parents find no empirical support for the belief that mothers are more necessary or play a more important role than do fathers in their infants’ and toddlers’ lives. In short, after their separation, both parents should maximize the time they spend with their young children, including the sharing of overnight parenting time.

How did public policy and the direction of custody decisions go so wrong? It seems related to the legacy of the “motherhood mystique,” the idea that mothers are innately better suited to care for young children. This was reinforced initially by John Bowlby, the father of attachment theory. Bowlby put forward the notion that infants form enduring affectional ties with just one person, normally the mother, before all other relationships and that this relationship is both ranks higher than and serves as a template for other relationships.

One Reply to “After Divorce, Overnight Stays With Dad Are Best”